Since the middle ages in Japan, samurai households had the custom of displaying banners or flags bearing the family crest to celebrate the birth of a baby boy on Boy's Day ("Tango no Sekku") on May 5th. This custom increased its importance in the Edo Period when it also became known as Iris Day ("Shobu no Sekku") from the plant that was used as a talisman to ward off evil spirits. The Japanese word for iris ("shobu") has the same pronunciation as the word meaning to honor military power or bravery, and the samurai wished for a successful career and good luck on the battlefield for their boys on this day. Samurai households displayed their ancestral armors and helmets in the home and banners outside their entrance.

Meanwhile, at the homes of merchants, who were considered to be of lower social rank than samurai even though they had more economic power, streamers in the shape of carp ("koinobori") were displayed. This custom started to rival their warrior counterparts in the mid-Edo Period. It is believed that the carp design was derived from an ancient Chinese legend where a carp which could successfully run up against a waterfall becomes a dragon, signifying career advancement and success in life. The five-colored streamer often displayed with the carp is believed to have come from the same legend where the splashing water from the waterfall shone in five bright colors.

The idea of creating streamers that let carp fly in the clear May sky shows the ingenuity of commoners in the Edo Period. We can learn much from their good taste. 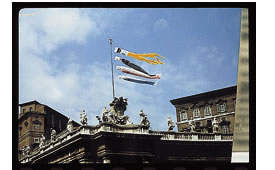 The koinobori available on JCRAFTS.com, made by Harada Mitsuzo Shoten, was presented to the Pope when he visited Japan.